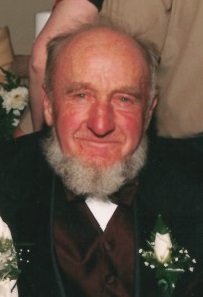 Eugene C. Soule, Sr., 94, of Hannibal, passed away Thursday, October 3, 2019 at University Hospital with his family by his side.

Gene was born in Lansing, New York to Charles and Bessie (Carpenter) Soule and resided in the South Hannibal area since 1973.  Gene worked on his father’s dairy farm, Curtiss Breeding Services and also as a landscaper in the Binghamton area from 1945-60.  He and his wife, the former Marion F. Kestner, co-owned and operated Eu-Mar Farms until 2010.  He was predeceased by his wife of 50 years, Marion in 2010, son Jonathan Soule in 1964, grandson Joshua Bednarski in 2003, his brother’s Merle, Roger, Elbert Soule, and his sister Vivian Thornton.

Eugene requested his services to be private. To leave a message of sympathy for the Soule family, please visit www.brownfuneralhomefulton.com

Share Your Memory of
Eugene
Upload Your Memory View All Memories
Be the first to upload a memory!
Share A Memory