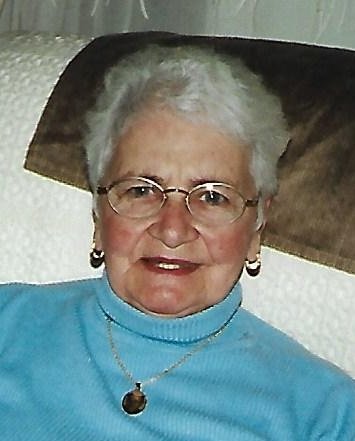 Martha Jean Guyer, 91, of Fulton, passed away peacefully Tuesday afternoon in the comfort of her daughter’s home with her loving family by her side. She was born in Fulton to Harold E. and Mary F. MacTurk Blance and graduated from Fulton High School in 1946. Martha retired from the Nestle Company in 1984 and held many positions in her 13 years of service, including being the first female machine operator at their Fulton plant. She was also employed at the cosmetic counter at Ferguson’s Drug Store. Martha’s priority in life was raising her family and caring for her husband.  She was a dedicated member of the Order of the Eastern Star, Elizabeth Chapter 105. Martha enjoyed babysitting her grandchildren and great grandchildren, bowling, music and dancing. She also enjoyed spending time along the St. Lawrence Seaway at her cottage in the 1,000 Islands.

Martha is survived by her children, Jodie (Linda) Guyer of Fulton, Gayle (Ronald) Woodward of Fulton, Dale Jacobson of Fulton, Harold (Nancy) Guyer of Fulton and Mary Ann (Jason) Smalley of Hilton, NY; her sister, Karen (Bruce) Thomas of Mebane, NC; 15 grandchildren, 25 great grandchildren and 7 great, great grandchildren. In addition to her parents, Martha was predeceased by her husband, Alan B. Guyer in 1984; her brother, Edwin H. Blance in 1975; her sister, Evelena B. Blance in 1985; her granddaughter, Heather Jacobson in 1995 and by her daughter, Cindy Burton in 2018.

Graveside services will be held at 1 p.m., Friday, April 26, 2019 in Section 26 of Mount Adnah Cemetery in Fulton. Calling hours were held from 1 to 4 p.m. with a service to follow on Saturday, February 2, 2019 at Brown Funeral Home, 21 Flood Drive, Fulton. Immediately following the service at the funeral home, a reception will be held at the Fulton Elks Lodge, 57 Pierce Drive, Fulton. Contributions may be made to the Alzheimer’s Association CNY Chapter, 441 West Kirkpatrick St., Syracuse, NY 14204-1305 in memory of Martha. To leave a message of sympathy for the Guyer family, please visit www.brownfuneralhomefulton.com

Share Your Memory of
Martha
Upload Your Memory View All Memories
Be the first to upload a memory!
Share A Memory