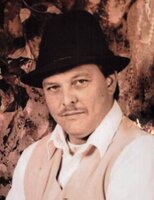 Kenneth C. Loveall, 59, of Oswego, formerly of Fulton passed away Thursday, July 28, 2022. He was born April 28, 1963 in Fulton to William C. Loveall and Sharon L. Urbach and was a graduate of G. Ray Bodley High School. Ken was employed for several years with Fulton Builders where he worked as a roofer and a mason. Upon their closing, he was a self-employed contractor. Ken was known for his generosity, his ability to make those around him laugh and the love he had for his family. He enjoyed having large cook outs where he would gather his family, friends and neighbors. Ken was a fan of the NY Giants and in his free time he enjoyed hunting and fishing. He will always be remembered by those that he was close to extending hugs as his way of saying “I Love You”. Ken is survived by his children, Sherribeth Bell, Matthew, Desirae, Karina, Jacob and Leanna Loveall all of Oswego; his siblings, Julia (Paul) Yablonski, Jeannie Kell, Robert (Chona) Lester, Jason Lester, Bill (Lisa) Urbach, Melissa (Adnan) Bdour and John (Karina) Urbach; his grandchildren, Joshua, Jersie, Aylonna, Emma, Castiel and Jacob, Jr. as well as several nieces and nephews. He was predeceased by his mother, Sharon Urbach; his father, William Loveall; his step-mother, Brenda Loveall and by his brother, Nelson Longsinger. Calling hours are 10:30 a.m. to 12 p.m., Tuesday, August 2, 2022 with services to follow at Brown Funeral Home, 21 Flood Drive in Fulton. Burial will be in Fairdale Rural Cemetery, Hannibal. A Celebration of Life will be held for Ken at the Fulton Moose Lodge on Tuesday, August 2, 2022 following the burial beginning at 3 p.m. Contributions in Ken’s memory may be made to the Upstate Foundation, Room 326 Campus Activities Building, 750 East Adams St., Syracuse, NY 13210 and designate the donation to be used for the Upstate Golisano Children’s Hospital. Condolences for the Loveall family may be left at www.brownfuneralhomefulton.com