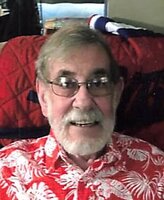 Darryl Loughrey, 79, of Bundyville, Town of Volney, died Thursday, July 7, 2022. He was the son of Archibald Earl and Harriet Glassford Loughrey, attended Minetto Elementary School and was a graduate of Fulton High School in 1961. Shortly after high school, Darryl enlisted in the U.S. Navy and was stationed on the destroyer, USS Radford, home port in Pearl Harbor, Hawaii. He was deployed to Vietnam twice and was honorably discharge in 1966. Darryl returned to New York and was employed at Armstrong Cork, Crouse Hinds, his father’s machine shop and retired as a machinist from Black Clawson in 2004 after 25 years of service. Darryl was a life member of the V.F.W. Post 5885 in Oswego, a member of the Hannibal American Legion, B.P.O.E. Lodge #830, Fulton and the Fulton Moose Lodge. He was also a member of the USS Radford Association and he and his wife, Patti enjoyed going to many ship reunions by train as neither of them liked to fly and tours to different cities throughout the United States. Darryl was a huge New York Giants football fan and got to see his Giants win four Superbowls. He is survived by his beloved wife of 17 years, the former Patricia Link; three stepchildren, Colin (Valerie) Massulik of Liverpool, Stacey (Landon) Drake of Schenectady and Elizabeth (Marvin) Roquero of Syracuse; his sister, Nancy (Tom) Cooper of Virginia; three grandchildren; one niece and three nephews. In addition to his parents, Darryl was predeceased by his sister, Susan Decker. There are no calling hours or services, contributions in Darry’s memory may be made to the Oswego Animal Shelter, 621 East Seneca St., Oswego, NY 13126. Condolences for the family may be left at www.brownfuneralhomefulton.com