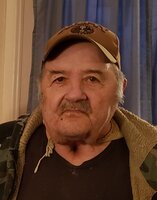 Ronald E. Ferraro, USA Retired, 79, of Fulton, passed away Tuesday, April 26, 2022 at home surrounded by his loving family. Ron was born October 26, 1942 in Oswego to Onofrio and Sarah Ferraro. He was a Vietnam War veteran and was proud to serve his country for 21 years in the U.S. Army. Following his retirement from the military, Ron accepted a position as a custodian with the Phoenix School District and retired after 20 years of service. He enjoyed spending his free time woodworking by building picnic tables and children’s furniture in which he took great pleasure gifting them to his family. He is survived by his daughters, Sandra A. Gadbois of Fulton, Lisa A. Anchini of Fulton and Dawn F. Besaw of Black Mountain, NC; his grandchildren, Robert, Felicia, Anthony, Kristina, Selena, Katheleen, Alexander, Zachary, Jordan, John, Jeremy, Brianne and Jasmyne and by his great grandchildren, Cameo, Vincent, Grace, Greyson, Lili, Leo and Lorenzo. In addition to his parents, Ron was predeceased by his wife, Gloria Smith Ferraro and by his daughter, Tina M. LaRock. Calling hours are 2 to 4 p.m., Friday, May 6, 2022 at Brown Funeral Home, 21 Flood Drive in Fulton. Graveside services with full military honors for Ronald along with committal prayers for his daughter, Tina will be held at 4:30, Friday, May 6, 2022 at Hannibal Village Cemetery. To leave a message of sympathy for the Ferraro family, please visit www.brownfuneralhomefulton.com