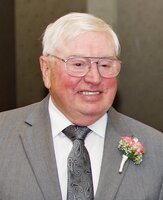 Donald “Don” Hewitt was a caring husband, father, grandfather, brother, uncle, and friend. He loved his life and had a true zest for living. He left this world suddenly Wednesday, April 6, 2022 while visiting his daughter and family in Canada. He was born to Earl and Mildred Hewitt in Hannibal, New York. After graduating from Fulton High School in 1952, he joined the Navy. In 1954, he married the love of his life, Rene Ellis. Together, they built a family, developed a taste for travel, and loved each other unconditionally. During his time in the U.S. Navy, Don served on the USS PCE 843, a submarine chaser during the Korean War. He had an honorable discharge in 1956. After his discharge, he was employed with Container Corporation of America for 10 years and the Nestle Company for 30 years as a Quality Control Technician until his retirement in 1996. Don was a proud summer resident and part-time employee of Brennan Beach. During his 30 years there, he was known as the “Mayor”, welcoming all who graced his path. If you drive down the main road today, you’ll notice a street sign stating "Hewitt Way” in his honor. He was also a notable member of the Fulton Elks Lodge, #830, proudly serving as their Wednesday night bartender right up until his untimely passing. Don was also a member of the American Legion Post #569, Fulton and the Fulton Moose Lodge, where he served as a former Governor. When spending time at home, Papa Don enjoyed being with his family and tinkering on different projects in his “mancave”. Donald is survived by his three daughters, Vickee (Terry) Davis of London, Ontario, Canada, Sheree (Curtis) Griswold of Fulton and Bethanne Hewitt of Georgia; his sister, Ruth Clavelli of Phoenix; nine grandchildren, 21 great grandchildren, and one great-great grandchild. In addition to his parents, he was predeceased by his wife, Rene Ellis Hewitt in 2019, brother, Burton Hewitt, and daughter, Kellee Kae. He will live on in more memories than we can even fathom. He touched so many lives, loved so hard and with such passion, and brought joy to so many people. A celebration of life for Don will be held at a later date. Contributions in his memory may be made to the First United Church of Fulton, 33 South Third Street, Fulton, NY 13069 or the B.P.O.E. Lodge #830, Fulton, 57 Pierce Drive, Fulton, NY 13069. To leave a message of sympathy for the family, please visit www.brownfuneralhomefulton.com