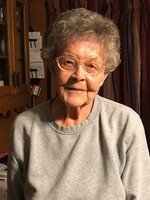 Barbara Gibson LaBoda, 94, of Fulton, passed away Monday, September 20, 2021 at home with her family by her side. She was born January 30, 1927 in Mount Pleasant to Ernest and Inda Gibson. Barbara retired in 1988 from Armstrong World Industries where she had been employed as an accountant for nearly 40 years, In her free time, she enjoyed tending to her garden and working outside on her lawn. Barbara is survived by her children, Karen Ottman of Baldwinsville, Alan (Angela) LaBoda of Ranson, WV, Mimi (Ken) Stuber of Fulton and Kim (Tim) Collins of Fulton; four grandchildren, Ashley Orlando-LaBoda, Alyssa Lucas, Austin LaBoda and Josie Collins; three great grandchildren, Theron, Gideon and Maia as well as several nieces and nephews. In addition to her parents, Barbara was predeceased by her husband, Walter and by her siblings, Alan Gibson, Casper Gibson, Edith Foreman, Miriam Ives, Sy Gibson, Claire Gibson and Bob Gibson. Private memorial services will be held at the convenience of the family. Contributions in Barbara’s memory may be made to a local charity of one’s choice. To leave a message of sympathy for the LaBoda family, please visit www.brownfuneralhomefulton.com