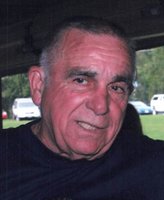 William “Lou” LeVea, Sr., 90, of Fulton, passed away Monday, May 24, 2021 at the Webster Comfort Care Home. He was born August 10, 1930 in Fulton to John and Kathryn Hanley LeVea. Lou served in the U.S. Air Force and was stationed at Griffis Air Force Base in Rome, New York. His responsibility while in the military was courier for the Pentagon delivering secured correspondence. After his honorable discharge, he was employed as a boilermaker for several years before joining the Painters & Allied Trades International Local #38, Oswego and was employed with Wiltse Construction until his retirement in 2004. Lou enjoyed his retirement by spending time at his son’s auto repair shop, “Volney Tire & Repair” lending a helping hand when needed. One of his favorite pastimes was spending Saturday nights at Oswego Speedway watching his son, Louie race and being part of the “Plum Crazy” race team. Some of his other interests were going to classic car shows, where he would have his El Camino on display for visitors to view. Deer hunting with his sons and watching football were other activities Lou enjoyed. He is survived by his six children, Kathleen LeVea of Webster, Billy (Missy) LeVea of Hannibal, Jay (Kelly) LeVea of Fulton, Louie (Margie) LeVea of Fulton, Dan (Heather) LeVea of Arkansas and Joni LeVea of Florida; two sisters, Anne Grassi and Kathryn Younis both of Fulton; 16 grandchildren; 24 great grandchildren; two great, great grandchildren as well as several nieces and nephews. In addition to his parents, Lou was predeceased by his first wife, Joan DeMatteo and his second wife, Joann Pellitier; son, David “Mikey” LeVea; sister, Mary Penkala; brothers, John and Robert LeVea and by his grandsons, Michael LeVea and Eric Longley. Funeral services will be held at 7 p.m., Thursday, June 3, 2021 at Brown Funeral Home, 21 Flood Drive in Fulton. Calling hours are 4 to 7 p.m. Thursday at the funeral home prior to the funeral service. Graveside services will be held at 11 a.m. Friday June 4, 2021 at St. Mary’s Cemetery in Fulton. Contributions may be made to Paws Across Oswego County, 2035 County Route 1, Oswego, New York 13126. To leave a message of sympathy for the LeVea family, please visit www.brownfuneralhomefulton.com