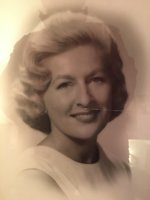 Shirley Parmley Koski Cooper, 99, of Fulton, passed away peacefully Thursday, April 22, 2021. She was born April 10, 1922 in Fulton to Earl and Genevieve Parmley and was a graduate of Hannibal High School. Shirley attended nursing school in Buffalo and earned her degree as a Registered Nurse. Throughout the 1940’s and during World War II Shirley was employed by hospitals in the greater Buffalo area specializing in newborn care. She eventually returned to Fulton and was a licensed real estate agent for Roger L. Thesier Real Estate for 10 years. Shirley was a member of the First United Methodist Church of Fulton and in her free time she enjoyed both painting on canvas and tole painting. She is survived by her son, John S. (Sheila) Koski; two grandchildren, Angela (Roman) Danyew and Alexander (Amberlee) Koski; her brother, Starr (Peg) Parmley; three great grandchildren as well as several nieces and nephews. In addition to her parents, Shirley was predeceased by her husbands, John S. Koski in 1961, Dave McFarlane and Fran Cooper; she was also predeceased by a son, Dean Koski in 2003. There are no services, burial will be private. To leave a message of sympathy for the Koski family, please visit www.brownfuneralhomefulton.com.