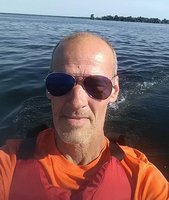 Douglas James Stoughtenger, 59, of Fulton, passed away Easter Sunday, April 4, 2021. He was born November 13, 1961 in Oswego to Francis and Deborah Stoughtenger. Doug was a talented woodworker and artist, many of his paintings were sold locally and on exhibit at the Everson Museum. He was a self-employed contractor specializing in home remodeling. Doug is survived by his son, Nathan D. Dean of Fulton; his siblings, Jerry (Marylou) Stoughtenger of Fulton, Estelle (Richard) Haggerty of Fulton, Debbie (Carl) Fiorini of Baldwinsville, Doreen Ryther of Fulton, James (Kelly) Stoughtenger of Fulton and William Francis Stoughtenger of North Carolina; he is also survived by several nieces, nephews, great nieces and great nephews as well as his beloved dog, Meghan. There are no calling hours, private memorial services will be held at the convenience of the family. Contributions in Doug’s memory may be made to the Oswego County Humane Society, 29 West Seneca St., Oswego, NY 13126 or online at oswegohumane.org. To leave a message of sympathy for the Stoughtenger family, please visit www.brownfuneralhomefulton.com