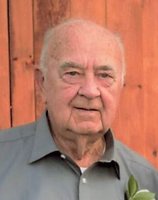 John Grela, 88, of Oswego, passed away Friday, January 15, 2021 at Bishop Rehabilitation and Nursing Center in Syracuse. He was born January 26, 1932 in Oswego to John and Agnes Pasisck Grela. John was a graduate of Oswego High School and served in the US Army during the Korean War. He was employed for many years at the Nestle Company where he retired as a Foreman in the Molding Department. John was a member of the American Legion and the Polish Legion of American Veterans Korajwo-Puhalski Post #17, Oswego. In his free time, John enjoyed fishing, bowling and golfing, where he learned a lot about the sport while being a caddy in his younger years. John and his wife Margaret also enjoyed camping, especially at Long Point State Park in the St. Lawrence where they held their annual family camping trip for more than 30 years. He is survived by his wife, Margaret Grela; three children, Thomas (Sharon) Stone of Martville; Stephen (Nancy) Grela of Harleysville, PA and Ann Marie (Brian) Sawyer of Oswego; eight grandchildren; eight great grandchildren; two great, great grandchildren as well as several nieces and nephews. In addition to his parents, John was predeceased by his brother, Raymond Grela; his sister, Helen Brostek and by a son, Edward Stone. Funeral services are 12 p.m., Wednesday, January 20, 2021 at Brown Funeral Home, 21 Flood Drive in Fulton. A calling hour will be held on Wednesday from 11 a.m. to 12 p.m. at the funeral home prior to the service. Entombment will be in All Saints Mausoleum at St. Peter’s Cemetery in Oswego. Contributions in memory of Mr. Grela may be made to Trinity Catholic School, 115 East Fifth St., Oswego, NY 13126. Condolences for the family may be left at www.brownfuneralhomefulton.com