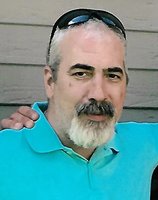 Jody Barden, 49, of Fulton, passed away Thursday, October 8, 2020 at Crouse Hospital. He was born October 3, 1971 in Oswego to Michael and Charlotte Barden and was a life resident of Fulton. Jody had been employed for several years in the frozen food section of the P & C warehouse in Syracuse and at the Rite Aid warehouse in Syracuse. He enjoyed buying and selling items on Ebay and was a self-employed metal scrapper. Jody is survived by his mother, Charlotte Dodge of Fulton; his father, Michael Barden, Sr. of Fulton; two step daughters, Katherine (Jake) Barnum of Fulton and Nicole (Matt) Bertram of Ohio; his brother, Michael “Mick” (Juliane) Barden of Fulton and by his grandchildren, Amelia, Wyatt, Caleb, Tristan and Locke. He was predeceased by his beloved son, Ridge M. Barden on October 14, 2011 and by his step father, Stephen E. Dodge on September 29, 2010. Graveside services for Jody and his son, Ridge will be held 11 a.m. Monday, October 19, 2020 in the cremation section of Mount Adnah Cemetery in Fulton. At Jody’s request there will not be any calling hours. Contributions in memory of Jody may be made to the American Cancer Society at donate3.cancer.org. To leave a message of sympathy for the Barden family, please visit www.brownfuneralhomefulton.com.