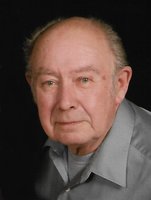 Dennis C. Lockwood, 77, a lifetime resident of the Town of Volney, passed away Thursday, September 10, 2020. He was born November 21, 1942 in Fulton to Charles and Margaret Lockwood and was a graduate of Fulton High School in 1961. Dennis spent his career in the food industry as a meat manager with several local grocery stores and retired from Struppler’s Supermarket in 2006. He was active in the Mount Pleasant Boy Scouts and was a member of the Fulton Moose Lodge where he held several offices including Governor. Dennis was the Town Supervisor for the Town of Volney for nearly 25 years, other than his family, his most proud accomplishment was the creation of the Volney Memorial Park. He is survived by his wife of 57 years, Elaine Ives Lockwood; his children, Michael (Crystal) Lockwood of Volney and Denise “Deanie” (Ronald R.) Owen of Volney; his brother, Gerald (Linda) Lockwood of Volney; his sister, Jean (Ronald) Ives of Volney; four grandchildren, Richelle (Greg) Hartranft, Alicia (Brandon) Burrows, Derek Owen and Brandon Lockwood; his five great grandchildren, Rhea, Lilia, Blake, Bryce and Colton as well as several nieces and nephews. In addition to his parents, Dennis was predeceased by a sister, Shirley Lockwood; two brothers, Earl and Neil Lockwood. There are no calling hours. Private services will be held for his family. In lieu of flowers, contributions in Mr. Lockwood’s memory may be made to the Volney Memorial Park, c/o Elaine Lockwood, 2628 County Route 176, Fulton, NY 13069 or dropped off at the Volney Town Hall. To leave a message of sympathy for the Lockwood family, please visit www.brownfuneralhomefulton.com