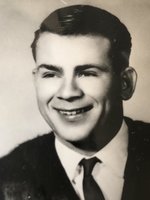 Charles E. McDougall, 76 of North Volney, passed away Tuesday, July 7, 2020. He was born May 8, 1944 in Oswego to Elmer and Clara Salsbury McDougall and was a graduate of Mexico Academy Central Schools. Charlie was self-employed in the construction trades as a machinist and millwright. He operated his construction business as a partner with PMF. He had a passion for working on and racing sleds along with hunting. Charlie was known for his ability to prepare a good meal for his family. He is survived by his son, Jack (Lisa Flynn) McDougall of Fulton; his brother, Harry McDougall of Fulton; his sister, Karen Warren of Florida; his grandson, Cody J. McDougall of Fulton; his former wife, Florence McDougall of North Volney as well as several nieces and nephews. In addition to his parents, Charlie was predeceased by his brothers, Tim and Ed McDougall. There are no calling hours or services. To leave a message of sympathy for the McDougall family, please visit www.brownfuneralhomefulton.com