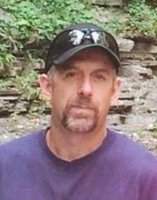 Mark A. Hoyt, Sr., 53, of Fulton, passed away unexpectedly Saturday, April 4, 2020. He was born November 20, 1966 in Fulton to David and Beverly Hoyt and attended Mexico Academy. Mark was employed as a Flat Bed Driver for Gypsum Express for nine years and was currently employed with Kamco in Liverpool for the past 16 years. He enjoyed creating and building items for his grandchildren such as step-stools and seats and watching them use their gifts. He and his wife enjoyed refinishing furniture to give to their children and for their own use. Mark always looked forward to spending time with his family, especially his grandchildren. Mark is survived by his wife of 20 years, Lisa Hoyt; his children, Lindsay Snyder of Oswego, Lauren Snyder of Oswego and Mark A. Hoyt, Jr. of Fulton; his parents, David and Beverly Hoyt, Sr. of Austell, GA; his siblings, Christine (George) Burlingame of Brewerton, Scott (Robin) Hoyt of Fulton, Tina Reid of Georgia and David Hoyt, Jr. of Georgia; four grandchildren, Jacob, Jared, Joshua and Maddison as well as several nieces and nephews. He was predeceased by his maternal grandmother, Ruth Thompson. Calling hours and memorial services will be held at a later date.