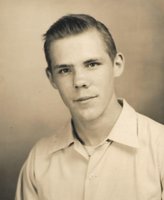 Stanley F. Kimball, 84, of Fulton, died Sunday, March 8, 2020 at The Grand in Rome. He was a life resident of the Fulton-Oswego area. Stanley is survived by his sisters, Marian Osborne, Vivian Cochrane, Joan O'Grady, Jeannette O'Grady, Delores (Milan) Hubbard and Betty (Raymond) Teitz; his brothers, Bill Kimball and David Kimball as well as several nieces and nephews. He was predeceased by his twin brother, Wesley Kimball in 2008. Calling hours will be held from 5 to 7 p.m., Thursday, March 12, 2020 with services to follow at 7 p.m. at Brown Funeral Home, 21 Flood Drive in Fulton. Burial will be in Mount Adnah Cemetery.