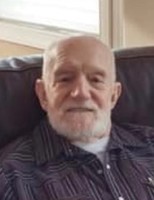 Richard E. Hottinger, 79, of Fulton, passed away peacefully Saturday, February 29, 2020 at Seneca Hill Manor. He was born September 29, 1940 in Washington Grove, Maryland to Lester and Frances Hottinger and was a graduate of Gaithersburg High School in 1959. Richard was a Master Plumber by trade and was self-taught in masonry and electrical work. Richard had been employed by several apartment complex’s in the Central New York area. He spent many years contributing his support as a coach for Fulton Youth Hockey and enjoyed watching Fulton high school soccer and lacrosse. Richard had a special talent for growing vegetables especially noted by his grandchildren for what they considered award winning tomatoes. He had a nightly tradition of watching “Wheel of Fortune” and “Jeopardy”. He is survived by his wife of 43 years, Betty Lee Hottinger; his daughter, Mary Lee (David Hart) Savory of Hannibal; his sister, Ruby Mitchell of Germantown, MD; his brother, Edward Hottinger of Germantown, MD; his three grandchildren, Matthew Savory of Rochester, Benjamin (Corinne) Savory of Tulsa, OK and Jeffrey (Shannon) Savory of Taftville, CT he is also survived by his three great grandchildren, Aislyn, Killian and Brinn. A memorial service will be held at 1 p.m., Saturday, March 7, 2020 at Brown Funeral Home, 21 Flood Drive in Fulton. Richard’s family will receive friends in the banquet room at the funeral home following the service. Contributions in Richard’s memory may be made to Fulton Youth Hockey, P.O. Box 683, Fulton, New York 13069. To leave a message of sympathy for the Hottinger family, please visit www.brownfuneralhomefulton.com