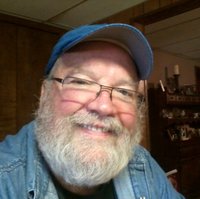 On January 2, 2020, Edward Thomas Jones, 71, of Fulton, passed away at the Tidewell Hospice House in Port Charlotte, Florida with his wife and two children at his side. Edward was born on February 13, 1948 in Oswego, New York to Mary and Emrys “Tom” Jones. He graduated from G. Ray Bodley High School in Fulton, New York in 1966 and joined the US Air Force directly out of high school. Upon his honorable discharge, Edward returned to Fulton and was employed at Syroco, Miller brewery and retired in 2010 from Chrysler aka New Process Gear (He was an intricate part of the "brain trust".) He enjoyed camping, kayaking in the Adirondack Mountains and traveling throughout the United States experiencing all that life had to offer. Edward also enjoyed having toddies with family and friends, laughing, playing cards and telling stories. Edward was a craftsman, mechanic and someone you knew you could count on. He was a loving, compassionate, giving, ornery husband, father, brother, uncle and friend. Edward is survived by his wife of 52 years, Colleen Jones; his daughter and son-in-law, Lora Lee and Ray Hettinger; his son and daughter-in-law, Edward T. and Gina Jones, Jr.; four grandchildren, Jonathan, Jamie, Keagan and Madi; his siblings, Barbara (John) Oleyourryk of Oswego, Alun (Denise) Jones of Cumming, GA, Kenneth Jones of Fulton, Linda Jones of Ithaca, Philip (Shelley) Jones of Granby and Christopher (Doreen) Jones of Scriba as well as his amazing nieces, nephews and great niece. He was predeceased by his father, Emrys “Tom” Jones and by his mother, Mary (Schwitter) Jones. Services will be held at a later date. In lieu of flowers, contributions may be made to the Tidewell Hospice House at tidewellhospice.org or to jw.org.