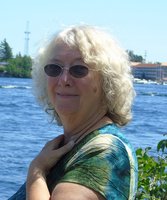 Mary Alice “Mei” Cunningham, 72, of Fulton, passed away Monday at her home. She was born October 14, 1947 in Fulton to Harold and Idell Van DeLinder and was a graduate of Fulton High School in 1965. She was a secretary and had been employed by Black Clawson for 15 years before working for the Hannibal Central School District for 21 years until her retirement in 2010. Mary Alice was a member of the Class Reunion Committee “Fulton High School Class of 1965”. She had a love of animals and hoped for “World Peace”. Mary Alice was always tending to her property, enjoyed camping and spending time outdoors. Her philosophy was that she didn’t need a security system, she had her own chainsaw, hatchet and Winchester rifle that she could use to defend herself.