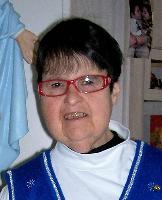 Cynthia A. “Cindy” Flynn, 55, of Cortland, formerly of Palermo, passed away peacefully Saturday morning at Our Lady of Lourdes Hospital in Binghamton. Cindy was born in Syracuse and was an outgoing people person. Her smile and friendly personality made the world around her a better place. Cindy was a communicant of St. Anthony of Padua Church in Cortland and worked as an assembler at J.M. Murray Center. She was predeceased by a brother, James Flynn, who died in 1960 and by a niece, Maria Fleming, who died in 2003. Cindy is survived by her mother and step-father, Maria and Donald Culkin of Fulton; her father and step-mother, Jack and Judy Flynn of Scriba; her fiance, Gerry Flick of Cortland; her siblings, John (Judy) Flynn of Palermo, Kathy (Bill) Yahner of Central Square, Mike (Grace) Flynn of Scriba, Mary (Bob Shipley) Brady of Brewerton, Daniel (Shannon) Flynn of Palermo and Brian (Chrissy) Flynn of Fulton; her Godson, Jay (Rachel Hutchinson) Elhage; step-brother, Donald Culkin of Liverpool; step-sisters, Christine (David) Demong of Syracuse, Jennifer Woolson and Jill Parker; step-brothers, Timothy Culkin of Cicero, Kevin (Kristen) Culkin of Chittenango, Sean (April) Culkin of North Syracuse and James Tompkins as well as several aunts, uncles, cousins, nieces, nephews and friends. A Mass of Christian Burial will be celebrated 12 p.m. Friday, December 2, 2016 at Holy Trinity Catholic Church, 309 Buffalo St., Fulton. Burial will be in St. Mary’s Cemetery, Dewitt. The family will receive friends in the atrium of the church on Friday, prior to the Mass from 10:30 a.m. until 12 p.m. Cindy’s family would like to extend a sincere appreciation to the residents and staff of the Regina House for the loving care extended to their loved one. Michael E. Brown Funeral Services has care of arrangements.